7 DAYS OF PRAYER AND FASTING

7 days of Prayer and Fasting

ECG Lesotho is having a seven days of Prayer and Fasting with National Pastor, Apostle Wyson Bottoman at Lesotho high school from 25th July to 31st August. All branch pastors are invited, come and experience the movement of God. Write down 7 prayer points which we will be praying for these 7 days. Get ready to receive your miracle.

Happy Birthday mother of the ECG Nation in Lesotho. We are blessed to have you Pastor Lauren. May God of our parents Prophet Shepherd Bushiri and Prophetess Mary keep increasing His grace upon you as He increases your age.

Award-winning Gospel music artist, Onesimus, is expected in Maseru this weekend from Friday, May 28th to Sunday 30th 2021. The South African-based musician, whose real name is Armstrong Sopani Kalua, is a Malawian national who rose to continental and global fame when he clinched the All Africa Music Award (AFRIMA) as the Best Male Artist under the Inspirational Music category during its 6th Edition hosted in Lagos, Nigeria in 2019. Afrima is an annual competition which aims to promote the unification of Africa through the celebration of its music, as well as the recognition of the best musical and creative talents in the continent.
Onesimus is part of a large team of celebrity gospel musicians under the Enlightened Christian Gathering Church (ECG) led by Prophet Shepherd Bushiri, which includes Swazi Dlamini and Praise “Mr Africa” Peterson, among many other talented artists. His genre is mostly Afro-pop Gospel. His debut visit to Maseru is part of ECG Lesotho’s national pastor Apostle Wyson Bottoman’s “Three Days of Restoration” programme scheduled for this weekend at Lesotho High School.
Onesimus won the award following the success of his popular album 'Messenger.' The 14-track Messenger album is a follow up to his debut gospel album Epikaizo, which he released soon after relocating to South Africa. Onesimus has also worked with some established names in the business including producer DJ Megi and DJ Moruti. He has also featured South Africa's hotshot Babes Wodumo on a song which was produced by DJ Megi and Destruction Boys. His other works include Panado, one of his latest and Overdue, Sound of Peace, Don't Pass Me By, Die For You, He Will Never Fail, Major 1's Prayer, Trending, Shekele, Superstar and Hosanna among others.Onesimus’ latest song, Solomon, speaks about the latest scourge of Gender Based Violence.
For more information, including possible interviews with Onesimus, please contact: 59211696 on WhatsApp. /p> Read more

Are you Single and you are believing God for marriage? This is your time,Do not miss this..Join Apostle Wyson Bottoman this saturday. 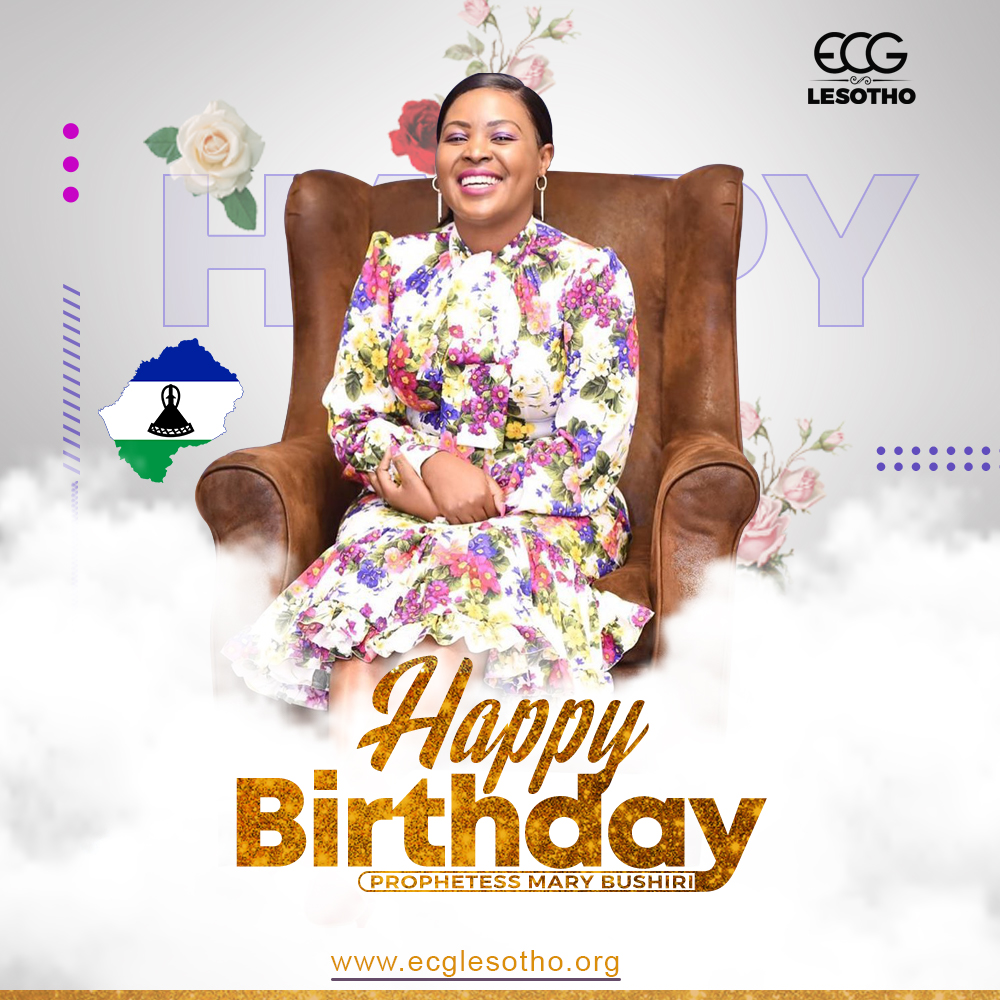 As ECG Lesotho, we wish our Spiritual Mother, a Woman on Fire a happy Blessed Birthday as she celebrates today

Enlightened Christian Gathering Church (Lesotho) yesterday afternoon donated a wide variety of groceries and blankets to God’s Love Orphanage in Maseru, as part of commemorations to mark the church’s 10th anniversary. Orphanage founder, Mme Neo Mutansi (60), expressed appreciation for the timely donation at the hour of need. “I could not sleep over the past few weeks worrying over how I will fend for these children. I sincerely thank ECG a lot for the generous assistance,” she said. Mme Mutansi started the orphanage in 2000 renting premises in Ha Mabote until 2009 when she secured a site at Sekhamaneng where sizeable premises have since been erected. The orphanage is home to 30 children aged between a year and 21 years of age. Some of those who passed through the home are now independent adults in the army, police and other sectors. Presenting the donation, ECG church national pastor for Lesotho, Apostle Wyson Bottoman said, in part: “We came to share love with this family at God’s Love children’s home as we celebrate ECG’s 10th anniversary today, which is our annual Global ECG day. “Our mission is to reach out to people in every location with love. We stand with the community and we believe as the government reaches out to help the community, we also do our part to share the little we have. “God is the father to the fatherless and I would like to tell all the children here that you are not orphans because God is our father. We therefore came here to share the love of God. We are standing with you and praying with you. This season (of COVID-19) needs us to share the love of God and this donation will not be the last from ECG,” he said. The church earlier yesterday morning also donated large grocery hampers to dozens of vulnerable members of its own congregation, as Apostle Bottoman said: “Charity begins at home”. ECG, founded by Prophet Shepherd Bushiri, is one of the fastest growing Christian denominations with branches all over the globe and millions of followers

It is a special day, on a great Sunday—put in place by our Father, Dr Prophet Shepherd Bushiri,for all registered members of the Enlightened Christian Gathering (ECG) to celebrate their membership by showcasing what our church stands for, viz. Salvation and Philanthropy. This is a day every member of the church should show how proud they are for belonging to thisgreat family through reaching out and touching the lives of at least, three non-ECG members.

As said earlier, this is a special day for all ECG members across the World to celebrate their membership of the ECG church. Activities on this day will mostly be ONLINE for countries stillunder the COVID-19 lockdown. But for countries NOT under the COVID-19 lockdown, outdoor meetings can be organised zed. These activities can, among others include parades, festivals and philanthropic visits.

As said earlier, this is a special day for all ECG members across the World to celebrate their membership of the ECG church. Activities on this day will mostly be ONLINE for countries stillunder the COVID-19 lockdown. But for countries NOT under the COVID-19 lockdown, outdoor meetings can be organised zed. These activities can, among others include parades, festivals and philanthropic visits.

Ready To be Part of this big Family ?